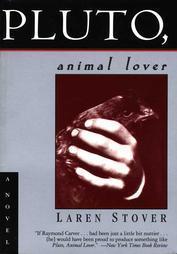 Pluto, Animal Lover creates its own universe with its own peculiar magnetism. It’s like Evelyn Waugh meets Henry, Portrait of a Serial Killer. It made my hair stand on end.
—John Patrick Shanley

Laren Stover's Pluto Hellbender Gerome is an American Psycho in the grand tradition of Poe's maniac narrator of 'The Tell-Tale Heart.' A weirdly palatable stew of grotesque humor and roadkill horror, Pluto, Animal Lover is spiced with the breaking of taboos no writer's thought to violate before.
—Thomas M. Disch

Not since the immediacy and delusional honesty of Holden Caulfield's voice has an American writer, employing first person narration, captured with authenticity and unblinking courage the internal life (as well as pathology and eccentricity) of a character. The novel is a marvel for capturing the internal monologue of a psychopath as he degenerates from mere amusing quirkiness to homicidal empathy.

I wish there were a prize awarded to novels that, after perhaps ten years or so, are deemed worthy of renewed attention and consideration. I would nominate Pluto, Animal Lover for just such a prize so that readers and reviewers would give it a second chance...the novel has haunted me ever since I first read it, holding my attention more than any other book I have read during the last thirteen years.
I have read the book at least once a year since it was published, and although a few things in it are beginning to seem dated, it continues to impress every time. Although I feel a pang of apprehension for admitting this about this book, given the numerous novels from writers with greater names and reputations that I have read since first reading Pluto, Animal Lover, it is, by far, the book I have most often recommended to both my students of literature and creative writing.
—Carlos Dews
(read the review http://www.smylesandfish.com/columns.php)

Every once in a while, a really deranged, deliciously talented writer comes along. Laren Stover is such a writer and Pluto, Animal Lover, her first novel, is a silly, entertaining little book.
I mean that literally. It's little. One of those new, down-sized issues that have been cropping up lately (of which Nicholson Baker's U & I a few years back was a prime, early example). A palm-sized hardcover, if you will - invented, no doubt, during a fit of inspiration by some harried publisher with a palmcorder and a lot of noisy grandchildren. Though I've noticed that publications of this genre tend to be slight in plot as well as dimension. More properly described as aggrandized short stories or essays than anything else, they do seem to serve the estimable purpose of distributing work of a quirky or eccentric nature.
—St. Petersburg Times

When the narrator of this quirky first novel introduces himself as Pluto Hellbender Gerome, animal lover, Stover's readers will immediately be transported to the private hell of a young man more aptly labeled an extreme misanthropist. From the outset, Pluto sets about perversely proving his love for animals in a fashion horribly reminiscent of any nightmarish narrator created by Poe. All the while, this immaculately dressed control freak obsesses about Wanda, the woman of his dreams, who possesses her own peculiar and secretive past and present. Stover's brilliantly dark humor may win readers over, but her depiction of the at times downright gruesome acts of this self-proclaimed animal lover is guaranteed to earn her low marks with PETA. Squeamish pet owners may want to think twice about cuddling up to this tale.

—Library Journal
Stover's little book is clever for the ways she makes Pluto seem so charming, even as we know he's so strange… Pluto is a sick little man, and Pluto, Animal Lover is a strange little book. But it's also compellingly readable, as it puts us up close to somebody we might wonder about, but would never really want to meet.
—Dayton Daily News

It's an odd little book, compelling and utterly chilling. Just don't make the mistake I did and read it in the waiting room at a veterinary clinic while your Komodo dragon is getting its nails clipped.
—Tom Robbins

Bohemian Manifesto, A Field Guide to Living on the Edge

“An Exultation of a State of Mind”

Lucky Me (The Twenty-Seven Notebooks of Nick Dante)